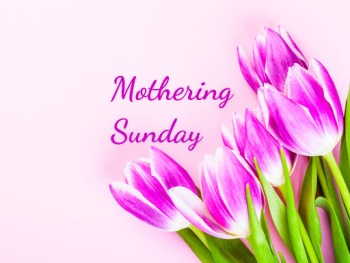 We come to Mothering Sunday, in strange and difficult times. Last year Mothering Sunday was the first Sunday of lockdown. All our preparations fell to bits, our churches were closed, there was a sense of being bewildered and bereft.

A year later and we are still bereft. We cannot visit our families. Travel is restricted. We are separated from those we love.

If there is a price of lockdown it is the social isolation which has affected every part of our society. In the months ahead I hope our churches can be places where people can connect. We need to work on new connections.

And this is an unusual Mothering Sunday. Originally Mothering Sunday was a day people travelled. They went back to the church where they were baptised, or to the Cathedral, the mother church of the Diocese. They would usually make the journey walking, and it was said they went ‘a Mothering’. Such travel of course, would be illegal today.

Those who travelled would reconnect with family, often taking a Simnel Cake as a gift, a reminder that whilst Mothering Sunday falls during Lent it is still a Sunday, the day of resurrection, so it remains a feast day.

By the early 1900’s the world had changed, not least following the

been forgotten. In 1921 Constance Penswick-Smith, the daughter of the vicar of Coddington, Northamptonshire, wrote a book

suggesting the revival of Mothering Sunday. It was a focus on family in an age when many of the poor worked in service or newly emerging industries, people who had little time off and precious few holidays, family life was changing and Mothering Sunday was a reminder that family matters.

It was Mothering Sunday, not Mother’s Day, an American invention which its creator, Anne Jarvis, later campaigned to abolish because it had been overtaken by commercialism and lost contact with its original intent.

I must confess to feeling rather lost when preparing for this service. Usually Mothering Sunday has meant churches filled with families, gifts of flowers for all ladies present, and a sermon aimed at a younger audience. But not this year.

A few years ago Fiona and I marked Mothering Sunday with the Great British Bake Off, we both made cakes during the service. We had the same ingredients but there the similarity ended. Fiona’s ingredients were weighed carefully on the scales – mine were measured in handfuls less whatever fell onto the floor.

Fiona mixed her cake in a Kenwood Chef, I used a paint stirrer mounted in a power drill. Fiona’s cake was made with love and care, mine was chucked in a bucket. Fiona’s table was neat and tidy. My side of the church looked like an explosion at Mr Kiplings.

The message was meant to suggest that love and care matter, a reminder to value the things our mothers do for us. It has to be said, that when the cakes were baked and presented to the Brownies and Cubs, both were consumed with equal delight. A reminder for parents that you don’t need to be perfect to be a good parent.

Both our readings speak of parenthood in difficult times, and they bear witness to the transforming power of compassion and courage. You don’t need to be a Biblical scholar to work out that Pharoah’s daughter knew exactly what was going on. When a Hebrew mother comes forward to look after the child hidden by the river she must have figured out whose child this was.

So often in the Old Testament it is the women who act with wisdom and discernment.

On 23rd October 1881, some of our older members may remember it, Edward King preached a sermon in which he mentioned a sign he had seen in a local park. The notice ran, “All persons are requested to assist the society in the protection of the flowers.”

There was no threat of punishment or hint of compulsion. Just an appeal to everyone’s sense of beauty and value to exercise their personal freedom for the preservation of a common good.

Such signs today would be different. Inevitably there would be a penalty for none compliance. We live in a culture which assumes people will only be good if they forced to be so.

God invites us to assist, without threat of punishment or hint of compulsion. All persons are requested to assist – it’s as simple as that.

But she saw the child and she chose to do good.

As you go about your week ahead, in the people you meet, difficult children, awkward adults, or in the handling of things, which Benedict reminds us are always God given treasures, reflect on that sign in the park.

All persons are requested to assist the society in the protection of the flowers.

You don’t have do. If you don’t there’s no come back. It’s just an invitation, to be the person who makes a difference for the better.